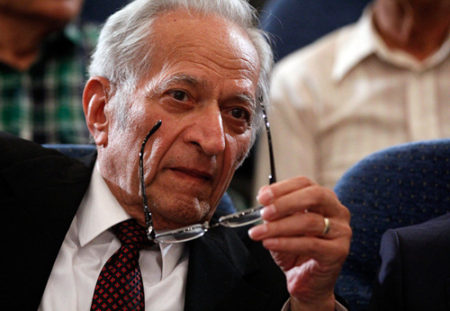 TEHRAN (ISW)— Professor Ali Asghar Khodadoust, an Iranian world renowned ophthalmologist, passed away at the age of 82 on Friday.

Khodadoust was an icon of ophthalmology and an international pioneer of eye research. The global reputation of professor Khodadoust is rooted in his extensive studies on corneal diseases and transplantation biology.

Several world renowned, famous American ophthalmologists have recognized him as the world’s best corneal graft surgeon. Due to his exceptionally impressive achievements in this field, a clinical finding has been named in his honor, the “Khodadoust rejection line”, a sign indicative of a chronic focal transplant reaction.

Born in 1935 in Shiraz, Khodadoust was an Iranian eye surgeon specializing in corneal transplantation.

In 1952, he passed the entrance exam with high scores at Shiraz University of Medical sciences.

A government grant in 1959 sent him, along with a few other exceptional students, to the United States to continue his medical education. Four years later, on June 28, 1963, he became the first foreign resident of ophthalmology at the prestigious Wilmer Eye Institute (WEI), Johns Hopkins University (JHU). Graduating in 1964, he first worked as a lecturer for one year and in 1965 he became an assistant professor of ophthalmology.

In 1968, Khodadoust returned to Iran. For 12 years, from 1968 to 1980, Professor Khodadoust spent half of each year performing research at WEI. Additionally, he was invited to teach at an international level from Peru, Ecuador and China to Italy, Turkey, Syria and Oman.

Despite his immigration, Dr. Khodadoust never missed an opportunity to return to Iran, at least twice year, to serve and improve the educational and therapeutic curriculums in Iran.